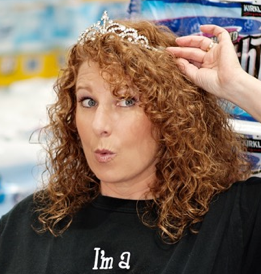 Sue Fabisch is the author (book, music, lyrics) of Motherhood the Musical, which has played across the US, Scotland and a 2-year tour around Australia (twice!) Other shows include the musical David Michael Finkelstein’s Bar Mitzvah, the children’s musical Poppy’s Pizza Palace and a brand-new two-woman comedy Me & My SMother.

An award winning songwriter for other artists, her songs have reached the #1 spot on Radio Disney. Sue’s own album hit the Top 10 spot on Billboard Magazine’s Comedy Chart and her CD “The Avon Lady Album”, featuring songs to inspire and motivate Avon Ladies, was marketed by Avon for their 3 million representatives worldwide.

Formerly from New Jersey, Sue has three kids (four if you count her husband), and lives in Nashville, TN. For more information, visit www.MommyMusic.com